Born on 30 October 1876, Gustav Gildemeister was the scion of an old Bremen merchant family. At 17 he began to study art at the Düsseldorf Academy, where he attended the elementary classes until 1898. That year he moved with some of his young artist friends to Munich, which at that time before the first world war rivalled Paris in importance as the European, indeed international, art capital.
There Gustav Gildemeister became acquainted with landscape painting, plein air painting, the latest forms of Jugendstil (German Art Nouveau) and Late Impressionism. These were movements and trends in art with which all avant-garde artists of the time and especially the group later known as the "Blauer Reiter", were preoccupied.
By 1903, under the influence of a trip to the Netherlands, he tended towards the tonal values of the Late Impressionists. Leaving Munich in 1904, Gildemeister settled in Arolsen, a rural town, and married Natalie Rühl there. In this town, once a royal seat, he spent six years in Klappsches House, his family's summer house.
During the years leading up to 1907, he did studies from nature and some landscape painting, both of which reveal a tendency to pointillism. For a brief period Gildemeister took up residence in his Düsseldorf studio to concentrate on the still life. Here the influence of Cézanne as well as the Neo-Impressionists Seurat and Signac surfaces in his work.
Once again in Arolsen, he painted several portraits and some more landscapes late in the summer of 1908, refining his approach to pointillism. However, he gradually abandoned the theme of nature altogether. The year 1910 saw him changing his style to flat compositions and a more vibrant palette.
Gustav Gildemeister and his family moved to Hamburg. In 1911 he was commissioned to paint large murals in "Bathildisheim", the institution for the disabled at Arolsen, and he chose religious motifs and the local landscape as suitable subject matter. The artist's work grew increasingly abstract and expressive, interspersed with geometric elements. With the outbreak of the first world war, he virtually ceased working. In 1914, however, his work was shown for the only time in public, at the Cologne Werkbund Exhibition.
Gustav Gildemeister was conscripted and fell at the front at Popielany on 15 August 1915. 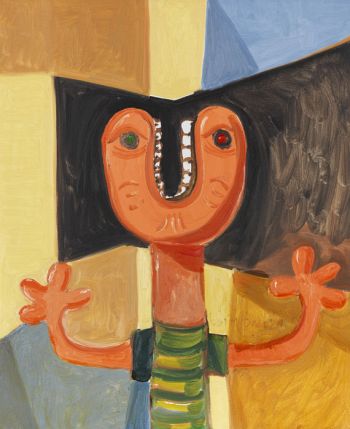 Would you like to sell a work by Gustav Gildemeister?